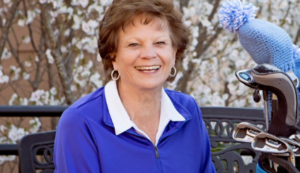 “Dr. Hermann is very knowledgeable and perfect for me because he’s so straightforward,” said Anne. “I didn’t need anyone to pat my knee and say it was going to be OK. The good Lord was looking out for me by giving me a great surgeon and a great oncologist.”

A dinner date with friends in November 2011 didn’t end in the typical way with hugs and a promise to get together again soon. Anne felt hot and her stomach hurt. As she waited for the car to take her home, she collapsed on the curb of the restaurant.

After a brief stint in the Emergency Room, Anne followed up with her primary care doctor who found her intestines had closed, but were starting to dilate. She was referred to a gastroenterologist who prescribed a liquid diet for a month. In January 2012, an endoscopy revealed she had cancer in her pancreas. Following surgery by Dr. Sahir Shroff to remove the cancerous tumor, Anne met Dr. Robert Hermann at Northwest Georgia Oncology Center’s (NGOC) Marietta Cancer Center to discuss her treatment plan.

“Dr. Hermann is very knowledgeable and perfect for me because he’s so straightforward,” said Anne. “I didn’t need anyone to pat my knee and say it was going to be OK. The good Lord was looking out for me by giving me a great surgeon and a great oncologist.”

Even though the cancer was caught early, Anne was diagnosed with the rarest of the four types of pancreatic cancer with an expected survival rate of three years.
She was hesitant to undergo chemotherapy after the prognosis, but is grateful she made the decision to fight. “The nurses created an environment that I didn’t hate going to,” said Anne. “I remember joining in as we all sang the country song, Red Solo Cup, out loud in the infusion room. I was encouraged by the nurses’ sensational care and loved watching them care for the other patients.”

Her nine weeks of chemotherapy treatments ended in June 2012. More than three years later, Anne has beaten the odds.

“Even in the midst of my treatment, I didn’t make my cancer the main focus in my life, because that’s not really life,” said Anne. “It bored me to ponder on it. I could choose to dwell on the bad or enjoy the good. I’d rather enjoy the good. You do get tired and you do have moments where you don’t know if you can fight anymore. The dark side of cancer will overwhelm you if you let it. I refused to let it.”

Anne’s taking the advice of her late mother who told her she was planning to take a trip after 9/11. “My mom was 80 years old at the time. I was worried about her travelling so soon after the tragedy. I told her I thought it was risky and she replied, ‘Anne Margaret, if I go having fun, God bless me.’ How do you argue with that? It’s a statement that’s held true for me. I’m not going to sit here and worry my life away. I say go live it.”

Anne retired in 2013 and keeping true to her mom’s mission to have fun, she’s maximized every free minute. She plays golf four times a week, enjoys her bi-annual getaways to Hilton Head and spends time with close friends in fits of laughter. Coming up on her fun docket is her first overseas trip – a Viking River Cruise down the Rhine through The Netherlands, Germany and France.

Those words describing her upcoming European escapade with friends sound suspiciously similar to how she desires to live her life – with a heart wide open. Anne’s not sweating the small stuff anymore. She knows through experience it’s better to have fun than worry. Her mom and cancer taught her that.