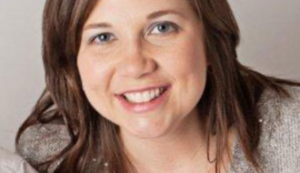 “When there was no Band-Aid to fix my cancer, we put our trust in God and Dr. Miller,” said Ashley. “Dr. Miller had the wisdom and expertise to make the right cancer treatment choices for me.”

Ashley Hallford noticed a knot in her neck in March 2007.  She spent the next eight months watching it fluctuate in size. It was thought the knot was simply an infected salivary gland, but with a family history of neck cancer, she begged for a biopsy. In November, the biopsy revealed what she feared most – cancer.

On Nov. 17, 2007, less than a week after Ashley received her cancer diagnosis, her son Harley was delivered. Ashley wasn’t. Little did she know her fight was just beginning.

Although only four pounds, Harley was as healthy as a full-term baby. His mom’s health, however, was on the line. Just four days after Harley was born, Ashley’s ENT physician successfully removed a malignant softball-sized neck tumor. Pathologists were unable to determine its cancer type.

Thinking all the cancer was removed, a mere seven weeks later the 26-year-old got the news the cancer had spread. While other mothers of newborn babies wonder if they’ll live through the sleepless nights, Ashley wondered if she’d live period. She wanted to watch Harley grow. She wanted to grow old with her husband David, a Cobb firefighter trained to face adversity with courage.

She was referred to Dr. Debra R. Miller at Northwest Georgia Oncology Centers (NGOC) for cancer treatment.   (NOTE:  Dr. Miller relocated with her family to North Carolina in August 2013.  She will be sorely missed by the NGOC team and her patients.)  The rare and aggressive nature of Ashley’s cancer compelled Dr. Miller to send some of Ashley’s cancerous cells to the Mayo Clinic and Dana Farber, two of the country’s best cancer centers. She wanted help to determine the best way to eradicate Ashley’s cancer.

After weeks of reviewing the cancer cells, Mayo and Dana Farber were stumped trying to diagnose them.  During this time, Ashley began experiencing headaches, double vision and intense eye pain. Her right eye became immobile. Not realizing it was related to her cancer, she went to an ophthalmologist. A MRI revealed a cancerous brain tumor in an inoperable location. The tumor was sitting on her right optic nerve where “only God can get to it.”

To determine if the cancer has metastasized to other parts of her body, Dr. Miller ordered a full body CT scan. Dr. Miller broke the news. The cancer also had made its home in her lungs with too many tumors to count. Ashley was a new mom with a limited prognosis.

“When there was no Band-Aid to fix my cancer, we put our trust in God and Dr. Miller,” said Ashley. “Dr. Miller had the wisdom and expertise to make the right cancer treatment choices for me.”

To combat the cancer, Dr. Miller began a treatment regimen of both chemotherapy and radiation. Four weeks later, the cancer tumors had grown in size and number. “It was almost like we were fertilizing it,” said Ashley.

Not to give up hope, Dr. Miller tried another type of chemotherapy discussed in her consultations with the best names in cancer care. Fortunately, the tumors began to shrink. In July 2008, finally a CT scan that brought joy to Ashley and her family. Dr. Miller told Ashley they didn’t see anything in the CT scan.

Not fully grasping the meaning of what Dr. Miller reported, Ashley responded, “When will you consider me in remission?” “Now,” replied Dr. Miller. They cried at the realization there was no evidence of cancer in her body when just four months earlier the first round of chemotherapy wasn’t working. Perhaps now she would regain her strength and be able to pick up her eight-month-old baby boy.

Noted on her chart is “undifferentiated neoplasm of unknown primary” meaning the origin and type of cancer that ravished Ashley’s body are unknown and now it’s gone.  There’s no name for it.  But the quality of care she received during her fight did have a name.

“Dr. Miller is truly compassionate and the greatest doctor my family and I have ever known. She treated me like she was saving the life of her own daughter,” said Ashley. “One day, when Harley hears and understands the gravity and grace of our story, he’ll think the same thing. Dr. Miller helped save his mommy’s life.”

In the fall of 2012, Ashley, David and Harley welcomed baby Grace into their family. Grace for the journey and new life – to Ashley, living cancer-free six years later, that’s what it’s all about.