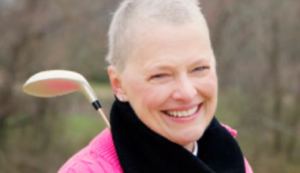 Dr. Carmen Klass of Northwest Georgia Oncology Centers in Marietta was the choice to direct Diane’s cancer treatment and care. “She is fabulous, extremely caring and forthcoming about how cancer affects not only your body, but your life. The personal interaction during my appointments means the world to me,” Diane said. “Dr. Klass told me they would cry with me and hold my hand if I needed them to. I got the feeling we’re all in this together.”

Since Diane Crute celebrated her 50th birthday almost nine years ago, she’s measured the passing years by where her long, blonde hair fell on her back. She never anticipated losing it in a matter of weeks.

Diane noticed a lump in her breast the size of a pea while conducting a self-exam. It disappeared, but came back “the size of a walnut.” Although her breast specialist said it was only two centimeters, a biopsy later revealed it was a two-centimeter mass of cancerous cells. They were attached to a lymph node under her left arm.

During a July 2011 layover in Nashville, the flight attendant got the news she needed to come to the doctor’s office right away. “The content of a couple of sentences coming from the nurse put my plans for the year on the backburner, including attending my own wedding.”

Dr. Carmen Klass of Northwest Georgia Oncology Centers in Marietta was the choice to direct Diane’s cancer treatment and care. “She is fabulous, extremely caring, and forthcoming about how cancer affects not only your body but your life. The personal interaction during my appointments means the world to me,” Diane said. “Dr. Klass told me they would cry with me and hold my hand if I needed them to. I got the feeling we’re all in this together.”

Chemotherapy commenced and by mid-September, her hair starting falling out. “My partner said he thought it was time to cut it off and so the shearing began,” Diane lamented. “I felt like a sheep being led to the slaughter, but I decided I would fight to live!” Her radiation treatments began in January 2012 and finished that March.

She now dons a short and sassy wig on her bald head, sometimes not. She doesn’t wear mascara because she doesn’t have any eyelashes. To a 20-year veteran of the skies whose career with a major airline always emphasized “looking good,” the physical changes brought about by cancer have been challenging. “Thankfully, I have Chip who loves me and is sensitive to my needs no matter what I look like – hair or no hair,” said Diane. “He’s fearful, but has faithfully been by my side for all the chemotherapy treatments and appointments.”

Prescribing to “you can’t take it with you,” Diane donated her home in Smyrna to the Loving Arms cancer support group. Had she not experienced cancer, her generosity and kindness would not have intersected with the needs of the group. The office space, but more importantly, the respite the home may provide to a woman in need was her motivation. “I learned early in life that material things aren’t important, but people are,” she said. “I heard many stories of women with cancer in dire situations and didn’t want anyone to be on the street like I was twenty years ago.”

Diane has no idea how many miles she’s flown over the years, but she’s never been on a more taxing and daunting journey. “You have to embrace it and enjoy today,” said Diane. “I look at people in a whole new light. Passengers complain about having no overhead space and I think to myself, ‘You’re going to let this ruin your day?’ Cancer provides perspective. So does looking into the faces of my two grandbabies.”

Although it’s still hard for Diane to believe this fight with cancer is really happening to her, she believes.