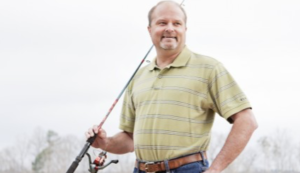 “I would say to other people diagnosed to cancer to make the most of every day. Some days you don’t want to get out of bed and some days are more difficult than others, but don’t give up,” said Ricky. “I was stage three and now I’m clear. People like me usually aren’t around eight years later.”

“Home-grown” fits Canton native Ricky Hitt to a tee, but so does Renaissance man.  He’s a husband, father, fisherman, horticulture enthusiast, weekend auction aficionado, and number cruncher who would give you the shirt off his back.

Born and raised in the Hickory Flats community in Canton, the Cherokee High School alum never left the county and knows it literally inside and out.   As a lead appraiser for the Cherokee County Tax Assessor’s Office, Ricky’s responsible for assessing the value of more than half of Cherokee’s 72,000 parcels of land.

One thing people would agree on is the dignity and spirit he exemplified during his courageous fight with testicular cancer that was diagnosed in March 2005.  Eight years later, he’s still living like there’s no tomorrow because that’s what cancer taught him to do.

Ricky was shopping with his two boys at Target when he first experienced pain in his mid-section that brought him to his knees.  Waving off an ER visit, he went home and began “eating Advil like candy.”   The following Monday, the pain and swelling was unbearable.

Ricky thought the cause of his misery was an infected vasectomy site, so his first call was to his urologist, Dr. Carl Capelouto.    Ricky’s hypothesis was quickly debunked with an ultrasound.  The tumor Dr. Capelouto saw was later confirmed to be cancerous and surgery was quickly scheduled to remove Ricky’s right testicle.

After surgery at Northside Cherokee Hospital, Ricky was referred to Dr. Curtis Miles.  The testicular cancer had spread to the lymph nodes and Ricky began a nine-week regimen of chemotherapy within two weeks of surgery.  Dr. Miles consulted with a world-renown testicular cancer specialist at the University of Indiana for a second opinion taking a collaborative, team-approach to Ricky’s care.

Needing chemotherapy five days a week, Ricky wondered how the looming Memorial Day weekend would be handled.   “The office was closed on Memorial Day, but Dr. Miles came in to administer my chemo,” said Ricky.  “He did it all.  It was my last full week of treatment and he didn’t want me to miss it.   It’s a great example of how much Dr. Miles cares for his patients to take time out of his holiday weekend.”

As a divorced father of two boys at the time, his parents, sister and home church provided the needed support and transportation assistance he needed to endure the grueling treatment schedule.

“I got so much more personal attention in Dr. Miles’ infusion room than I did at a hospital-based center I had to go to once a week for a while,” said Ricky.   “My nurse, Stacey was always engaging and I was treated like one of her and Dr. Miles’ friends.  It makes you feel good to be there – my eight hour infusion treatments didn’t feel like eight hours.”

After completing the nine weeks of chemotherapy, Dr. Miles saw some residual cancerous lymph nodes the chemotherapy didn’t eradicate.  Ricky rested for a month before undergoing another surgery to excise the nodes with cancer.  The six-hour surgery at WellStar Kennestone Hospital left him with a five-day hospitalization and a surgical souvenir – an 88 staple scar track from his chest to naval.  But time has proven his chemotherapy and surgery were a success.

Years later, Ricky’s visits to NGOC have now tapered down to once a year for blood work.

“I would say to other people diagnosed to cancer to make the most of every day.  Some days you don’t want to get out of bed and some days are more difficult than others, but don’t give up,” said Ricky.  “I was stage three and now I’m clear.  People like me usually aren’t around eight years later.”