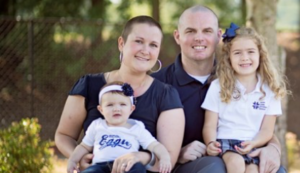 Her family in North Georgia is full of “warrior-survivors,” so after drying their tears after hearing the news, they decided Shaan’s diagnosis “was one more battle our family was going to fight and win.”

Cancer has no consideration for age or stage in life.  Shaan Hawkins was 27 years old with a newborn when she was diagnosed with locally advanced breast cancer on January 2, 2014.  Fortunately, Shaan didn’t break under the weight of the adversity.  She allowed God and others to help carry the load.

In July 2013, Shaan, her husband, Jeremy, and their six-year-old daughter Emma, moved from their hometown of Dalton so Emma could attend Acworth’s North Cobb Christian School.   A few months earlier, Shaan, who was pregnant with their second daughter, noticed the spot on her breast that was a cyst on an earlier ultrasound was getting bigger.  It continued to grow during the end of her pregnancy.

Lily was born in October 2013 and a couple of months later, a mammogram and a biopsy confirmed Shaan had cancer.  “When I got the news, I thought about my grandmother.  She was a trooper when fighting breast cancer and made the ordeal a positive experience.  I was going to do the same and be the inspiration she was to me.”

Shaan was referred to Northwest Georgia Oncology Centers’ (NGOC) Marietta Cancer Center by her breast surgeon, Dr. Kristin Corgan, where Dr. Raul Oyola immediately began an aggressive regimen of chemotherapy.  “He was patient and sympathetic with me but attacked cancer with an aggressive treatment plan noting we should have started chemotherapy yesterday since it was growing fast.  I had some symptoms normally attributed to being postpartum, but they also were symptoms of my cancer spreading.”

Her family in North Georgia is full of “warrior-survivors,” so after drying their tears after hearing the news, they decided Shaan’s diagnosis “was one more battle our family was going to fight and win.”   Shaan knew the moment she gave up would be the moment she would lose the battle.

With imminent hair loss from chemotherapy, surgery, and days of not feeling well, Shaan’s biggest concern was how to explain the physical challenges and changes to Emma.  The room mom and member of the Parent-Teacher Fellowship board knew she couldn’t hide the by-products of her fight, so she was proactive with her approach.  She sent out an email to the parents of  Emma’s classmates to let them know what was to come.

“Cancer took away my hair and breasts, but I decided it wasn’t going to take away my time with my kids,” said Shaan, who has stayed active at Emma’s school in the midst of chemotherapy and during preemptive radiation treatments.  “I want my girls to see their mom fight and come through this.  I want to be a model for them as they have a higher risk of getting breast cancer, too.”

The staff and parents at North Cobb Christian School rallied for the Hawkins family bringing meals, caring for the kids and praying.  “They took a personal interest in me and my family.  Even people we had never met before.  They say you join a family at North Cobb Christian School and it’s true.  I can say the same thing about Dr. Oyola and his team.  Everyone has taken great care of me.”

Shaan says having cancer has given her a better story as she stays positive and entrusts her life and wellbeing to God.  “It’s not the testimony I would have chosen, but it’s mine.  I can’t feel sorry for myself.  There’s no time for a pity party.  Ultimately, I know cancer doesn’t define me.  There’s so much pressure to look and be a certain way, but having cancer has shown me that beauty is more than skin deep especially since I’ve lived without wigs or padded bras.”

The lesson’s worth it when Shaan hears her daughter say, “You are still beautiful, mom.”