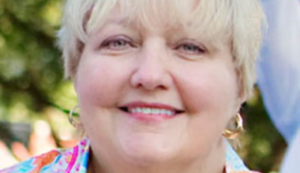 Vickie began radiation treatments in January 2011 and began a rigorous chemotherapy regimen after Dr. Hahm reviewed her cancer-prone family history. Dr. Hahm reassured Vickie her chances of survival were great because of early detection.   “She did a good job at explaining why I needed chemo and convinced me, despite side effects, it was the best route for a cure.”

Vickie Jones, the pastor’s administrative assistant at New Georgia Baptist Church in Villa Rica, GA, was well accustomed and content to live by faith, but a breast cancer diagnosis in November 2010 tested it.  Although shocked and shaken, she found peace knowing she was in the hands of God and an expert medical team fighting for her every step of the way.

Her breast specialist leveraged cancer’s early detection by performing a lumpectomy before the New Year on her stage 1, yet the aggressive form of breast cancer (HER-2 positive).  After surgery, her surgeon encouraged Vickie to make the trip to Marietta to consult with Northwest Georgia Oncology Centers, P.C.’s Dr. Hillary Hahm.

After meeting Dr. Hahm and her team, including Oncology Nurse Kristina Nix, at her first appointment, she decided the trip was worth making. “Kristina happened to escort me and my daughter, Amanda, on a tour of the cancer center.  I had no idea the influence Kristina would have on my care then,” said Vickie. “NGOC is thorough, complete and you’ll get what you need with care administered by the nurses.  You won’t be treated as well anywhere else.”

Vickie began radiation treatments in January 2011 and began a rigorous chemotherapy regimen after Dr. Hahm reviewed her cancer-prone family history. Dr. Hahm reassured Vickie her chances of survival were great because of early detection.   “She did a good job at explaining why I needed chemo and convinced me, despite side effects, it was the best route for a cure.”

Chemotherapy commenced in February 2011.   When Vickie arrived for her first infusion of chemotherapy, Kristina delivered it.  “After that first treatment, I requested Kristina because I wanted to get to know her and wanted her to know me,” said Vickie.   “Everything she did for me and for others was done with professionalism and love.”  NGOC honored her request and Kristina was at Vickie’s side for every treatment except one.  “I had to let her go on vacation,” quipped Vickie.

Every three weeks Vickie got “big treatments,” as she dubbed them.  Being slowly infused with a triple combination of chemo drugs followed by two weekly doses of Herceptin took its toll.

“As good as the drugs are to combat cancer; they are hard on your body.   The NGOC team did a great job at letting me know what to expect and helping me fight through it,” said Vickie. After 18 “big treatments,” Vickie’s infusions tapered down to every three weeks from July 2011 to February 2012 – a welcome reprieve and a sign of her body’s positive response to treatment.

As a tribute to Kristina’s loving manner and compassionate care, Amanda sent a nomination letter to Care Magazine nominating her for the Extraordinary Healer Award.  Amanda witnessed Kristina’s compassion and care for her mom and saw displays of passion from the other oncology nurses extending beyond infusion center hours.

Vickie recalls one patient suffering from many complications from cancer.  “Amanda and I were deeply impressed when Kristina and other nurses went to the hospital after their shift to visit the patient and his family.  The passion they have for their work and their patients is unprecedented.  I know because I experienced it first-hand.”

Vickie sees the group of oncology nurses in NGOC’s infusion center as the real help-mates through her cancer journey.  “Your people are what matters the most to the patients,” said Vickie, who now has no evidence of disease.

One year after her first chemo treatment, Vickie was administered her last.   She celebrated with Kristina and the rest of the NGOC team and patients with a celebratory cake baked with love by her daughter and decorated with the milestone she fought to reach – the finish line.